To share your memory on the wall of Jessie Morris, sign in using one of the following options:

Jessie left us peacefully to be with the Lord on June 24, 2020. She was born November 4, 1926, in Waycross, Georgia, the youngest child of James and Eva (Lastinger) McMillan. At the age of 20, she met John... Read More
Jessie Dora Ann McMillan Morris

Jessie left us peacefully to be with the Lord on June 24, 2020. She was born November 4, 1926, in Waycross, Georgia, the youngest child of James and Eva (Lastinger) McMillan. At the age of 20, she met John Russell Morris and they were married in 1947.

Together they raised three children, Frances Eileen, Phillip Russell and Sharon Naomi Morris while living in Jacksonville, Florida. The family moved to St. Petersburg, Florida, where Jessie enjoyed the nearby beaches and being close to the water. She was able during this time to fulfill a life-long dream of becoming a nurse and graduated in March, 1961, and began working at Mound Park Hospital. John changed jobs, so the family moved to Gainesville, Florida, and Jessie worked at Alachua General Hospital until she retired. In all, Jessie kept her Nursing License for thirty-five years.

In August, 1977, Jessie moved to Waco, Texas, where she joined First Assembly of God Church, became a volunteer at Harrison Center and Friends for Life. She made many wonderful and caring friends, while staying busy and being active in her new family church. Jessie loved to be in the Lord's house and witnessing to everyone.

She also enjoyed making jams and jellies, as well as canning many delicious fruits and vegetables, which she shared with all her family, friends and anyone in need. She always had a camera at hand and was known for saying "Let me get a picture!" She took great joy in always making some new craft or gift, cooking or baking for any and everyone. Spending time with family was her greatest passion, along with sharing memories of family from the past.

Graveside services and burial will be held at Riverside Memorial Park in the Garden of the Good Shepherd in Jacksonville, Florida at 10:00 A.M. on Thursday, July 2, 2020.

To send flowers to the family or plant a tree in memory of Jessie McMillan Morris, please visit our Heartfelt Sympathies Store.

Receive notifications about information and event scheduling for Jessie

There are no events scheduled. You can still show your support by sending flowers directly to the family, or planting a memorial tree in memory of Jessie McMillan Morris.
Visit the Heartfelt Sympathies Store

We encourage you to share your most beloved memories of Jessie here, so that the family and other loved ones can always see it. You can upload cherished photographs, or share your favorite stories, and can even comment on those shared by others.

Posted Jul 01, 2020 at 01:14pm
We love you so much and in some small way I pray this tree in your memory will bring great comfort for years to come. Gone but not forgotten.

Posted Jun 27, 2020 at 10:29pm
I love you Aunt Jessie ❤️. You will be greatly missed. Sing and dance now that you have your wings. I know you will be. 💜 With Momma, Daddy, Sonya and so many more.
Comment Share
Share via:
NG

Posted Jun 27, 2020 at 12:31pm
Sweet Miss Jessie was one of the dearest friends we've ever had. Loved her sweet smile and hugs. She was always ready to encourage and pray for us -- and always sharing her delicious cakes and jams. Our prayers go out to her family. She will be greatly missed.
Comment Share
Share via:
DD

Posted Jun 27, 2020 at 12:02pm
Miss Jessie was my neighbor for 9 years, when I was going through cancer she was always there with a prayer or some great food she always made for everyone. She will be greatly missed. My thoughts and prayers are with you all during your time of sorrow.
Comment Share
Share via:
JE

Posted Jun 25, 2020 at 06:27pm
Miss Jessie was my neighbor for over ten years. After my husband passed away in 2016 she became very dear to my heart. She always told me she was praying for me and that God is good. She did not always have an easy life and she had a strong faith in her Savior Jesus Christ. She taught me many things by example and one was her deep love for family and friends. She will be missed for the rest of our lives and one day we shall see her again. Love you Miss Jessie thank you for everything you taught me.
Comment Share
Share via: 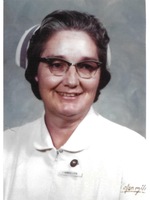