To share your memory on the wall of Dr. Ralph Rummage, sign in using one of the following options:

Provide comfort for the family of Dr. Ralph Rummage with a meaningful gesture of sympathy.

Ralph Rummage, 93, of Waco, passed away on January 8, 2020 at BaylorScott & White – Hillcrest after a short illness. Public Visitation will be at OakCrest Funeral Home from 5 – 7 p.m., Thursday Jan. 16. Memorial Services will be 1 p.m. Friday, Jan. 17, at Columbus Avenue Baptist Church, Waco, with Rev. Josh Vaughn officiating. A private family burial will precede the memorial service at Oakwood Cemetery.

Ralph was born on June 3, 1926 in Tulsa, Oklahoma to Clarence and Gladys Rummage. He graduated from Will Rogers High School, Tulsa, Oklahoma in 1944. After graduation, he attended Baylor University, receiving his Bachelor of Arts in 1949. While attending Baylor, Ralph met and married Laverne Russell in 1948 and moved to the Bay area of California, where he attended Golden Gate Baptist Theological Seminary, receiving his Masters of Divinity in 1953.

While in seminary and after graduation, Ralph and Laverne began their career in pioneer missions, participating in church planting in California. In 1957, they moved to Bixby, Oklahoma and pastored for two years. In 1959, Ralph and Laverne were appointed by the Foreign Mission Board (now International Mission Board) as career missionaries to Southern Rhodesia, Africa (now Zimbabwe) for 32 years, retiring to Waco, Texas in 1991.

While on the mission field, Ralph completed his Doctor of Ministry degree in 1985 from Southwestern Theological Seminary, Fort Worth, Texas. In their retirement, they continued to be involved in volunteer-based domestic and foreign missions to Zimbabwe, Wisconsin, Kenya, and Bosnia. Ralph remained an active member of Columbus Avenue Baptist Church singing in the choir, teaching Sunday School, and serving on many committees until his death.

Ralph and Laverne spent their lives in service to Jesus Christ, their Savior, by serving people in their family, church, and communities (domestic and foreign) wherever they lived and worked. Known as “Dad” or “Baba” to his family, Ralph was loved for his relentless desire to share the love of Christ. He was also known for his sense of humor and corny “dad jokes.”

In lieu of flowers, please consider donating to the

International Mission Board,
3806 Monument Ave
Richmond, VA 23230
NOTE: To donate online, please scroll down to the bottom of this screen and click: THE INTERNATIONAL MISSION BOARD
Read Less

Donations are being accepted for: INTERNATIONAL MISSION BOARD OF THE SOUTHERN BAPTIST CONVENTION.

We encourage you to share your most beloved memories of Dr. Ralph here, so that the family and other loved ones can always see it. You can upload cherished photographs, or share your favorite stories, and can even comment on those shared by others.

Posted Jan 15, 2020 at 11:45am
Mike and family, we are so sorry for the loss of your grandfather. Our thoughts and prayers are with you during this difficult time.

Posted Jan 12, 2020 at 02:01pm
Ralph and Laverne were instrumental in helping plant an English speaking service in QueQue. He baptised me in Amaveni Baptist church, a local African church. It was quite unusual for a white person to be baptised in a black church. We created history and helped break down any resistance to mixed race service. Many years later Ralph sang at our wedding. His deep voice was so appreciated. The Rummages had a wonderful open home and were dearly loved. Thank you for a life of service to our Lord. You blazed a path and were deeply loved. Love from Reg and Beti-Ann McLean and family.
Comment Share
Share via:
HS

Posted Jan 09, 2020 at 06:36pm
Dave, our thoughts and payers are with you and your family during this time of loss and grief. Chavers Storage Employees Panama City, Florida

Flowers were purchased for the family of Dr. Ralph Rummage. Send Flowers 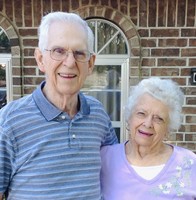