To share your memory on the wall of Annie Cagle, sign in using one of the following options:

Print
Annie Frances Webb Dennard Cagle passed from this life to be with our Lord and Savior on Easter Sunday, April 12, 2020 at her home in Waco, Texas.

Annie was born February 1, 1931 in Crawford, Texas, the daughter of Jack Webb & Lillian ... Read More
Annie Frances Webb Dennard Cagle passed from this life to be with our Lord and Savior on Easter Sunday, April 12, 2020 at her home in Waco, Texas.

Annie was born February 1, 1931 in Crawford, Texas, the daughter of Jack Webb & Lillian Mae Bronson (both deceased). Following school in Crawford, she married Harold Dean Dennard, Sr. and together they raised 6 children until his death in 1982 at the age of 47. In the years while raising her children, she worked for the Waco plant of Owens Illinois.

Upon the death of her husband she established and successfully operated a residential and commercial cleaning company in and around the Waco area. During the golden years of retirement, she and her husband Milford enjoyed traveling around Texas (and Georgia) to various parks on lakes operated by the Corp of Engineers where they performed duties of Gate Attendants. It was a retirement hobby they loved to do and were afforded the opportunity to not only visit beautiful places, but they made some lifelong friends along the way.

In addition to her parents and husband Harold, she was preceded in death by her brother, Sam Webb of Waco, her sister Minnie Lou Webb Hood of Valley Mills, and two of her sons Terry Allen Dennard of China Springs & Gary Lynn Dennard of Pasadena.

She is survived by her husband of 24 years Milford Lewis Cagle of Moody; daughters, Jeanine Milner and her husband David of Elberton, GA, Debbie Milam and her husband Jim of Hewitt, TX, and Anita Dennard of Elberton, GA; one son, Harold (Buddy) Dean Dennard, Jr. and his wife Deb Horton of Snellville, GA and two daughters-in-law of her late sons, Rebecca Dennard (widow of Terry) of China Springs, TX and Gina Dennard (widow of Gary) of Waco, TX. She is also survived by her sisters, Patricia Faye (“Pat”) Webb Powell, Virginia Bell (“Dooley”) Webb Bates and brothers, Jerry Allen Webb and wife Brenda, Wayne Webb and wife Barbara and Leon Webb.

In addition, she was blessed with a host of nieces and nephews whom she adored and further blessed beyond measure with many grandchildren, great-grandchildren and great-great grandchildren all of which filled her heart with joy.

Because of the restrictions and social distancing guidelines in effect as a result of the Covid19 Pandemic currently governing the assembly of large groups of individuals, the family is sad to announce that the service of remembrance will be a very small, private graveside memorial. The family plans to organize and host a celebration of her life and a formal memorial service at a later date which will be announced once the Covid19 Pandemic restrictions and guidelines have been lifted and they are able to do so.
If you would like to send a floral gift of remembrance to the family for the private graveside service, those may be sent in her memory to OakCrest Funeral Home.
Read Less

To send flowers to the family or plant a tree in memory of Annie Cagle, please visit our Heartfelt Sympathies Store.

Receive notifications about information and event scheduling for Annie

We encourage you to share your most beloved memories of Annie here, so that the family and other loved ones can always see it. You can upload cherished photographs, or share your favorite stories, and can even comment on those shared by others.

Bryan, Sherry & Bailey Dorsey, and other have sent flowers to the family of Annie Cagle.
Show you care by sending flowers

Posted May 05, 2020 at 02:42pm
We at Seniors Complete Insurance are saddened to hear of Annie's passing. We would like the family to know it was an honor to serve Annie the past 9 years with her insurance needs. We know that she will be greatly missed.

Posted Apr 15, 2020 at 07:25pm
Annie Cagle, (Mom Frankie) my mother in law GARY Dennard wife, she was a true beauty an much loved, i grow up with Gary and his family and always looked up to mom Frankie, she had a smile you couldn’t resist. I will truly miss you mom, give GARY a big hug for me ! Gina Dennard
Comment Share
Share via:
B

Posted Apr 15, 2020 at 12:02am
Annie Cagle was my Mother in law for 42 years. That's a long time to spend with someone. And I can say Annie was a woman who truly Loved Jesus Christ like all of us she wasn't perfect but she tried her best to be . My special times with her is when we would talk about the Lord , read scriptures , and pray. You just can't have it any better than that. She was a mother who cared for her family, loved her family ,and because she loved her family she would tell you just what was on her mind. You might agree or you might not , but you knew where she stood. One things for sure, Annie was a lady of Style!! No dressing down!! She loved to put on a fashion statement and she could !! She always looked and dressed with Style and fashion. She was gifted with seeing beauty. She would take her style fashion right into her home . Her homes were always a Show room filled with Annie's special touch. Amazing!! She would take things that seemed of no use to some people and make a beautiful piece of art work to show off. She showed us her talent and skills . Well Annie has received her great reward , that reward is seeing the one she has loved and trusted in .. Jesus Christ . Amen to that. Becky Dennard 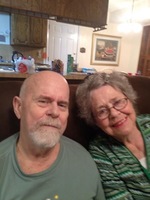