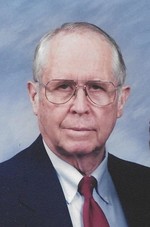 J.D. Chastain, 93, passed away July 2, 2018 surrounded by members of his loving family at his home in Waco, Texas.

Born May 9, 1925, on the family farm in Grosvenor, Texas, he was the son of the late Homer H. and Dora Baugh Chastain. He was the youngest of eleven children. He attended Grosvenor public school and graduated from Brownwood High School in 1942. He then attended Howard Payne University for one year before enlisting in the Navy in 1943 where he served in the Pacific on the aircraft carrier USS Saratoga (CV-3). He returned to Brownwood in 1946, completed college, and graduated from Howard Payne in 1948 with degree in chemistry.

He was employed by the Texas Department of Public Safety in August 1948, attended the school for recruits for the Texas Highway Patrol before transferring to the crime lab as a chemist. He rose through the ranks to become the Director of the Crime Laboratory Division. He supervised the Crime Lab expansion to a system with field labs over the entire state and also established the statewide breath alcohol testing. Division Chief duties also included supervision of Fingerprint and Criminal Records, Texas Crime Information Center, and Uniform Crime Reporting.

During his years of service with the DPS, he served on many nationwide committees and received numerous awards, but he considered the prestigious worldwide Borkenstein Award (for work in research, administration, and development of nationwide breath alcohol testing) the most revered. He retired from the DPS in 1980 with 32 years of service. Concurrent with time in the DPS, he served in the US Naval Intelligence Reserve, retiring at the rank of Captain in 1978. During his retirement years, he was elected Brown County Commissioner three times beginning in 1980, resigning and retiring during his third term in 1990.

He is survived by his beloved wife of 40 years, Mary Ann, whose love and care in the latter years helped him through tough times.

Graveside services are pending at this time and will take place at Fairview Cemetery in Grosvenor, Texas.

To send flowers to the family or plant a tree in memory of J.D. Chastain, please visit our Heartfelt Sympathies Store.