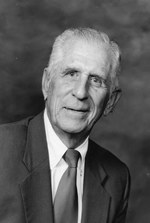 John Francis Sheehy, Jr., Waco attorney, died after a brief illness on April 20, 2018. A Mass of Christian Burial will be celebrated at St. Louis Catholic Church on Monday, April 23 at 11 a.m. Burial will follow in Holy Cross Cemetery.

A rosary will be led by Deacon Greg George at OakCrest Funeral Home, 4520 Bosque Boulevard, on Sunday at 4 p.m. followed by a visitation from 5 – 6 p.m.

John was born on April 10, 1923 to John F. and Herma Jelinek Sheehy in Waco. He attended Waco schools and played football for Waco High under coach Paul Tyson. Upon graduation from Waco High School he entered New Mexico Military Institute in 1940. After Pearl Harbor, all of his high school class left school to join the military. John became a 19-year-old B-17 bomber pilot and flew 21 combat missions in Europe in World War II, bringing his crew home safely each time while logging over 750 flight hours. He was truly a member of the Greatest Generation.

After the war, he entered the University of Texas Law School, where he graduated in 1948. He returned home to begin his law practice at Sheehy, Lovelace and Mayfield but was recalled for the Korean War and was assigned to the Bureau of Immigration in Washington, DC. He returned to his law firm where he was active for 70 years and served as a mentor to countless young attorneys.

In 1953 he married Mary Barnwell. He spent his lifetime serving his family, his church, his country, his profession, and his community. John served in leadership positions with the Providence Foundation, Waco Industrial Foundation and the Chamber of Commerce. He was currently a director of the Kearns-Reicher Charitable Trust and the Mark Deering Foundation. He was honored for his support of Catholic Education and awarded the Lumen Gentium for his service to the Diocese of Austin. John served on the Waco McLennan County Bar Association and is a Life Fellow of the Texas Bar Foundation. He was currently serving on the Board of the Texas High School Sports Hall of Fame.

In 1983, for the first time, the Texas Board of Legal Specialization offered certification in Residential, Commercial and Farm and Ranch Real Estate Law. At the age of 60, John sat for and passed all three exams, one of few to do so. In February of this year, John was the inaugural recipient of an award that will henceforth bear his name: The John F. Sheehy, Jr. Distinguished Attorney Award that will be presented annually in the State of Texas.

John enjoyed life to the fullest and was a great story teller. He loved weekend work on his ranch in Coryell County and Texas Longhorn sporting events. He enjoyed his Monday lunches with Civitan friends and his Wednesday night “Prayer Meeting” (aka poker game) and his weekly lunches with his grandchildren. He and his friends enjoyed trips to Shreveport to support the horse track and casinos. He enjoyed golf, crappie fishing and quail hunting in Three Rivers, Texas.

John loved to deer hunt but he never brought his gun. John said that he knew how long he had known someone by the nickname they used: Buddy, Bud, Jeep, John, John Jr., Dad, Poppa or Mr. Sheehy. He was a faithful member of St. Louis Catholic Church where he faithfully attended daily mass for many years.

John was preceded in death by his parents; his wife, Mary; his brother, J. Robert Sheehy; and sisters, Patsy Ann Sheehy and Norma Rhodes.

John is survived by three children, Vicki Smith and husband, Jack, of Marlin. John Sheehy III (Trip) and his wife Laura of Waco, and Mike Manale and his wife, Debi, of Hurst; a sister, Joanne Hoover and husband, Cameron of Albuquerque, New Mexico; nine grandchildren, eight great-grandchildren, and many nephews and nieces.

If friends wish to do so, memorials can be made to St. Louis Catholic School, Reicher High School, The Providence Foundation or the charity of your choice.

The family wishes to acknowledge Terry Stevens, Kenneth Young, Gary Young, Lisa Ozment, Della Stinson and Larry Riley for their devotion and a sincere thank you to the staff of Providence Hospice Place.

To send flowers to the family or plant a tree in memory of John F. Sheehy, Jr., please visit our Heartfelt Sympathies Store.