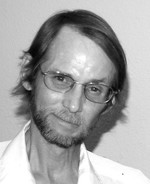 The third child of Carl Alexander Trautschold, Jr., and Sara Don Cocke, Walter grew up in Waco, attended St. Mary’s Catholic School and St. Alban’s Episcopal School, and graduated from University High School. Walter moved to Houston, Texas, after graduation and worked in horticulture and landscape design until a severe motorcycle accident altered his life. Walter’s extensive rehabilitation included relearning how to walk and talk. His recovery was aided by Dr. Stanley Seaton, a childhood friend of Walter’s stepfather, H. Wallace Wright, who founded Tangram Ranch in San Marcos as an experimental rehabilitation facility for persons with brain injuries. Dr. Seaton’s work with Walter transformed the field of psychiatry, demonstrating that the brain can heal through intensive, long-term therapy. After three years at Tangram Ranch, Walter returned to Waco. He then moved to Granbury, Texas, and worked as a quality and safety inspector for the construction of Comanche Peak Nuclear Power Plant. After the completion of the power plant, Walter returned to Waco where he worked at the family meat processing plant until his retirement. Clients on his delivery route became fast friends and looked forward to their regular visits with Walter.

Walter was admired for his sharp wit, conversational knack, and compassion for others. Like his mother, he loved science, engineering, and reading and, given the opportunity, Walter would tell you in great, great detail about his latest ideas and inventions.