To share your memory on the wall of Tom Blackburn, sign in using one of the following options:

After graduating from Waco High School class of 1956, he served his country honorably in the 82nd Airborne and then with the 10th Special Forces Group. Afterwards, entering the business world Tom enjoyed a long and highly successful career as a classic American entrepreneur. His early ventures in Dallas included Tom Blackburn Assoc. and Amertex, a high-end carpet distribution and sales firm, followed in later years by Star Canyon, Inc specializing in supplying multi-family and hospitality projects with natural stone from around the globe.

Along the way he produced the highly acclaimed documentary sports film “Champions Forever” regarding the storied careers of heavyweight boxers, Muhammed Ali, Joe Frasier, Larry Holmes, George Foreman and Ken Norton. In his later years Tom devoted much of his time doing the most important work of his life as an evangelist preacher with Bill Glass Prison Ministries and the local Waco State Jail Ministry.
You may sign the online guestbook at www.oakcrestwaco.com.
Read Less

To send flowers to the family or plant a tree in memory of Tom Blackburn, please visit our Heartfelt Sympathies Store.

Receive notifications about information and event scheduling for Tom

There are no events scheduled. You can still show your support by sending flowers directly to the family, or planting a memorial tree in memory of Tom Blackburn.
Visit the Heartfelt Sympathies Store

We encourage you to share your most beloved memories of Tom here, so that the family and other loved ones can always see it. You can upload cherished photographs, or share your favorite stories, and can even comment on those shared by others.

Posted Oct 06, 2020 at 07:33am
Tom chose me as his friend over 25 years ago. He was the proverbial larger-than-life person and man's man. To me, he was a source of encouragement and inspiration. His zeal for the Lord in the last many years of his life inspired and energized me. Jeanie, you are in our prayers. You never failed in caring for Tom no matter how hard the road. We love you.
Comment Share
Share via:
HS

Posted Oct 04, 2020 at 02:04pm
With loving memories of "Tom Blackburn",We were buddies for 65 years. Tommy was truly one of a kind, a good heart, ready to help friends and family

Posted Sep 27, 2020 at 04:05pm
Jennie and the whole family, I’m sorry to hear about Tommy! You guys were so good to me while I was out in California all those years ago. My thoughts are with you all! All my love, John Fore
Comment Share
Share via: 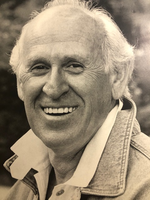