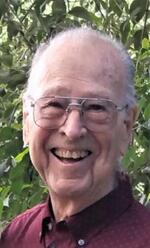 Our father has passed on after a life full of love, wonderful experiences and sage advice. He taught us how to live as a man, father, grandfather, and a great grandfather. His faith in the Lord and his family has been an inspiration to all who knew him. After years of numerous heart issues, a fall during his normal strengthening exercises caused a broken hip which could not be repaired. He passed at Harris Methodist in Fort Worth, surrounded by his family – some in person and the remainder throughout the world. In his final hours his children, grandchildren, and many great grand children got to say goodbye.

Bob was born on March 7, 1931, the second son of Cornelius Frederick Behrens and Evelyn Ackley Behrens in Houston Texas. He was proceeded in death by his elder brother Fred and his parents. Dad attended Christ the King elementary school and St. Thomas High school when he met his future wife, Mary Roselyn Busick. After a US sponsored trip to Korea, they married on May 16, 1953.

Dad worked for Southwestern Bell Telephone for many years, first as an installer, and then after completing the accelerated business degree plan at the University of Houston in just under 12 years was moved into management activities. He also fathered four children during that span, each of which required at least a semester off. For many years, our memory was dad heading into work at about 6 am and coming home about 6 pm. This taught us the wisdom of avoiding Houston traffic if at all possible.

Through the years mom and dad lived in several locations in the Houston area (Heights, Spring Branch, West Hwy 6) until all their children had left town. They then moved to Lago Vista for their golden years, enjoying life on the lake with friends and only minor cursing at the game of golf. They spent their platinum years in Waco, near their youngest daughter Melinda and her growing family. For a short while they were at St. Catherine’s Independent Living but with the outbreak of Covid moved to daughter Becky’s house in Azle.

Dad was a proud veteran and Catholic. He was a Eucharistic Minister, Lector, enjoyed singing in the choir and a member of the Knights of Columbus. He attended mass regularly at the following parishes through his life – Christ the King, All Saints, St. Jerome, and St Cecilia in Houston, St. Mary Our Lady in Lago Vista, St. Jerome in Waco and Holy Trinity in Azle. In his platinum years his day job was as an ER volunteer at Providence hospital in Waco, offering a smile to countless others in need. He was also a professional piddler, keeping busy doing things such as preserving jalapenos, cracking pecans, sorting nuts and bolts, or just making minor improvements around the house, usually without duct tape. In his later years forays onto the roof were discouraged. Mom and dad enjoyed traveling and made many memories in the US and abroad.

Bob leaves behind his loving wife of 67 years Mary and his children - son Greg Behrens and wife Lori of Jonestown, daughters Becky Wilkes and husband Jim of Azle, Kathy Behrens and husband Roger Hardy of Redlands, CA, and Melinda Douglas and husband Colin of Woodway.

A memorial mass and inurnment will be held at a later date at St. Jerome’s in Waco. In lieu of flowers, a memorial contribution can be made to St Jerome’s in his honor or the charity of your choice.