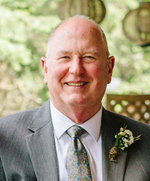 Memorial services will be held at a later date, after Covid-19 restrictions have passed. OakCrest Funeral Home of Waco will handle arrangements.

Dr. Kirkpatrick was born December 28, 1944 in McAllen, TX to Joseph R. and Elnora Anderson Kirkpatrick. He was raised in the Rio Grande Valley, graduating from McAllen High in 1963. He received his B.A. from Texas Christian University in 1967, his Master of Divinity from Yale Divinity School in 1970, and his Doctor of Ministry from Brite Divinity School in 1994.

In 1970, he was ordained into Christian Ministry at University Christian Church in Fort Worth and over the next four decades served Christian Church (Disciples of Christ) churches throughout Texas and Oklahoma — with settled pastorates in El Paso; Amarillo; Houston; Chickasha, OK; Richland Hills, TX; and Guthrie, OK. In 1999, he became an intentional interim minister helping churches that were in crisis between settled pastors. He served in this capacity in Fort Worth; Flower Mound, TX; Lakewood Christian Church in Waco (twice); Amarillo; Longview; Temple; and Keller, TX. He retired in 2011.

He was a former president of the Kiwanis Club of Chickasha, a founding member of the Chickasha Public School Foundation, and served on the Chickasha Library Board. After retiring, he served on the Board of Visitors of the John V. Roach Honors College at Texas Christian University. He was a member of Seventh and James Baptist Church, where he was active in mentoring children through Big Hope at South Waco Elementary, and active in the Central Texas Genealogy Society, serving as editor of their quarterly magazine. He loved singing, Legos, mystery novels, and his family.

He was preceded in death by his parents.

The family suggests memorials be made to a local food pantry, or an organization benefiting children, education, or Parkinson’s research.