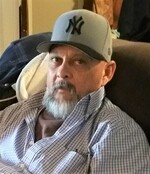 Ray was born on May 18, 1962 in Rosebud, TX to Raymond and Linda Sisneros. He served our country and then joined the National Guard. Ray worked at General Tire. When General Tire closed, he continued his education at TSTC in Waco, TX for a career in diesel mechanics. He was a truck driver for many years and was also employed with Lindsay Construction for several years. He also spent time laying tile for Charlie York Tile.

Ray's favorite hobbies included playing in pool tournaments, fishing, and spending time with his grandchildren, who he prank called often. In January 1988, he met the love of his life, Eva. They were wed on December 29, 1993. Ray took on the role of father to her four children. All the children continued to foster a strong relationship with Ray. Ray was an amazing husband, dad, grandfather, son, brother, uncle, cousin and friend to many.

He was preceded in death by his nephew, Charlie Sisneros, Jr.

In lieu of flowers, the family is asking for donations which can be made at their gofundme account https://gofund.me/6031ebe7

You may share a memory or send a message to the family at www.oakcrestwaco.com