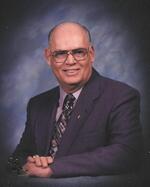 Paul D. Hocker, 87, of Waco passed away Wednesday, December 30, 2020. A private family graveside service will be held at Oakwood Cemetery in Waco.

Paul was born September 13, 1933 in Malone, Texas to Adolph and Noma (Huber) Hocker. He loved music very much and played the piano for many years at Austin Avenue Methodist Church, where he was a devoted member for 56 years. After serving his country in the US Army he went to work at the VA Hospital and retired after 31 years of service. He also worked as the receptionist and security clerk at his church.

Paul is preceded in death by his parents. He leaves behind his brother, Harmon Hocker of Malone, Texas as well as numerous cousins.

In lieu of flowers memorials may be made to First Methodist Church Downtown, 1300 Austin Avenue, Waco, Texas 76701.