To share your memory on the wall of Paul Orta, sign in using one of the following options:

Paul and Cynthia began their journey in 1984. They married on June 1st, 1997. On June 1st, 2007 they renewed their vows through the church at St. Louis Catholic Church.

Paul was an active member of the Knights of Columbus; attaining all 4 degrees, later he became an active member in the A.C.T.S. community, which is a church leadership organization. For many years Paul assisted in the fund raising of parking cars during the Heart of Texas Fair and Rodeo at OakCrest funeral Home. Paul is remembered as an exceptionally good husband and father to his family. He was also a good cook and dancer. He enjoyed making others laugh, even when you didn’t want to laugh, you left laughing with a smile on your face. Paul was a very family oriented man. Paul and Cynthia were inseparable and they made a great team together. He loved to listen and sing Tejano music to Cynthia. One of his favorite songs was “Borracho de Besos” by La Fiebre. He enjoyed being with his family and walking his dogs and always looking forward to meeting new friends.

To send flowers to the family or plant a tree in memory of Paul H. Orta Sr., please visit our Heartfelt Sympathies Store.

Receive notifications about information and event scheduling for Paul

We encourage you to share your most beloved memories of Paul here, so that the family and other loved ones can always see it. You can upload cherished photographs, or share your favorite stories, and can even comment on those shared by others.

Posted Oct 07, 2020 at 10:53am
We at Disciplined Investors wish blessings and peace to Paul's wife, family, and friends. Paul was a hard worker and will be missed by those he served throughout his life.
Comment Share
Share via:
PT

My sincerest condolences to the family. Mr. Orta always came when I needed a parent conference. May the Lord give his family strength and may he rest in peace. 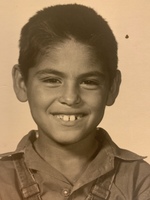