To share your memory on the wall of Mitchell Parrish, sign in using one of the following options:

Mitchell was born at home in Shelby County, Texas, to Fred and Lena Parrish. He was the youngest of three boys. He had an identical twin brother, Morris, and an older brother, Bill. He graduated from Tenaha High School in 1943, worked in a local department store, then joined the U.S. Navy in 1946, serving to transport American POW’s home from Italy.

He married LeFern Moffet on July 20, 1947, in Center, Texas, continued working for Bealls Brothers Department Stores in East Texas and then in the Texas panhandle. Later they moved to the Dallas Metroplex where he worked for Allied Stores, and finished his business career in San Antonio as Vice President with Dillards. He retired in 1986 to Waco and began his second “career” in voluntary service to the Waco community by making thousands of nursing home and shut-in visits for the next 25 years.

He was preceded in death by LeFern, his wife of 70 years.

In lieu of flowers, memorials can be made to Spring of Hope Ministries Foreign Mission Fund, P.O. Box 261, Elm Mott, TX 76640.

To send flowers to the family or plant a tree in memory of Mitchell Lawrence Parrish, please visit our Heartfelt Sympathies Store.

Receive notifications about information and event scheduling for Mitchell

We encourage you to share your most beloved memories of Mitchell here, so that the family and other loved ones can always see it. You can upload cherished photographs, or share your favorite stories, and can even comment on those shared by others.

Posted Apr 02, 2020 at 04:13pm
It was our privilege and blessing to know Mr. and Mrs. Parrish during their time at Western Heights. In later years Mitchell would still greet you with a warm smile, and your could feel his Christ like nature. He was a dear, Christian gentleman.
Our sympathy to all of his family.
Joyce and Don Alanis
Comment Share
Share via:
BK

Posted Apr 02, 2020 at 03:01pm
I am so sorry to learn of the passing of Mitchell. I have lost the first next door neighbor I had in Waco. Elaine and I moved next door to Lafern and Mitchell on Wendy Lane in 1993. They were such good neighbors. Mitchell had a vegetable garden behind his garage next to my house. We talked often over yard work. He had great Christmas lights and forced me to decorate my home too. Lafern got my wife interested in the Newcomers Club and they played lots of bridge. Mitchell even helped me get our tall clock running. We were sorry when they moved away nearer their children. We visited them but grew farther apart. He was a good man.
Comment Share
Share via:
RR

Posted Apr 02, 2020 at 11:14am
Didn't know Mr. Parrish for very long but one didn't need to in order to recognize what a loving and God-fearing man he was. I never heard him utter an unkind or divisive comment to anyone. He will be missed but not forgotten. Rick Rickerson
Comment Share
Share via:
D

Posted Apr 01, 2020 at 02:18pm
This a great day of celebration of Mitchell for the Lord has brought home a great Christian. I and Rita are so thankful GOD allowed us the preliviage of being a small part of his life. I learned so much about being a better Christian and the many years we prayed together. You will be missed but I know you are now praying for us next to Jesus what a awesome day. To the family may the Lord bless and comfort you at this time. Amen
Comment Share
Share via:
CD

Posted Mar 31, 2020 at 11:53am
Corrie and I extend our deepest sympathy to Mitch’s family. Mitch is truly one of the most loving, servant hearted and faithful Christians I have ever known. I was truly blessed in serving as his pastor for approximately 17 years. I well recall those initial days when Mitch made a commitment to serving the needs of senior adults in nursing homes, retirement centers and those who were homebound. Soon he was averaging more than 100 visits each week. God only knows the tens of thousands who were blessed through his leadership, sacrifice and loving ministry. Praise God that he and LeFern have been reunited in heaven. To God be the glory! Psalm 40:1-4a The Living Bible
Comment Share
Share via:
MB

Yes, Mr. Parrish brightened many of my mother’s days during her stay in a care center, having conversations about gardening with her and reminding her of God’s love. What a legacy he leaves! Marilyn and Robert Borchgardt 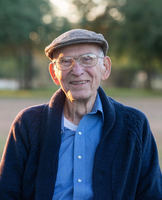