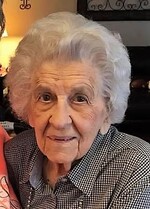 Melrose Olson Smith, 95, of Waco, passed away peacefully on December 17, 2020. Graveside services will be at 12:00 pm, Tuesday, December 22 at Oakwood Cemetery, Waco with Heath Kirkwood officiating.

Melrose was born March 9, 1925, in Mt. Calm, Tx to Orvil Kelsey Wollard and Fannie Loretta Robinson. She graduated from Mt.Calm High School. She married Clarence Olson Jr. They had two children Clarence H. (Skipper) Olson III and Cathi Ann Olson. Clarence Olson Jr. preceded her in death in 1974. She was the office manager at Sears Waco Credit Union for 30+ years where she greeted everyone by name and with a smile.

She married Harold M. Smith in March of 1984. They enjoyed dancing at Geneva Hall and traveling to Las Vegas. Melrose was truly one of a kind who blessed many lives. She enjoyed crocheting, spending time with her family, and doing crossword puzzles.

She was preceded in death by son Clarence H. (Skipper) Olson III in 1987, husband Harold M. Smith in 1996, daughter Cathi Ann Olson in 2018, and longtime companion Ed Aigner in 2016. Survivors include her only granddaughter Jennnifer Moore Johnson and husband Kevin, great-grandchildren Kendall, Kourtney, and Konnor Johnson.

The family would like to express our deep appreciation for the love and care provided to Melrose by the staff at Stoney Brook Assisted Living in Hewitt. Also, special thanks to Terrie, Hope, Kerra, Rick, and Justin with Alamo Hospice.

In lieu of flowers, the family requests donations be made to a meaningful charity of your choice.