To share your memory on the wall of Mary Villarrial, sign in using one of the following options:

Mary Gamboa Villarrial the daughter of Eulogio Gamboa and Maria Guardiola Gamboa was born on June 3, 1923 in Rosenthal. During the 1929 Depression the family moved to the old Speegleville area and finally to Sandtown, a Mexican community in South Waco. She and her family resided along South First Street and finally at 1100 South 1st Street.

At Saint Francis Catholic Church, Mary was a member of Las Hijas de Maria and was devoted to teaching Catechism to hundreds of children attending St. Francis over the course of 15 years.

Memorials may be made to Sacred Heart Catholic Church.
Read Less

To send flowers to the family or plant a tree in memory of Mary Gamboa Villarrial, please visit our Heartfelt Sympathies Store.

Receive notifications about information and event scheduling for Mary

We encourage you to share your most beloved memories of Mary here, so that the family and other loved ones can always see it. You can upload cherished photographs, or share your favorite stories, and can even comment on those shared by others.

Your niece Chita Romo Villarial and Family and From Mark and Josette Daigle sent flowers to the family of Mary Gamboa Villarrial.
Show you care by sending flowers

Posted Jun 10, 2020 at 02:24pm
Robert, my heart aches for you and your family. May your many wonderful memories of your mother bring you joy and peace.

Posted Jun 10, 2020 at 12:47pm
Our Love and heartfelt Prayers, we will miss our Sweet Aunt. Praise God she is Safely home in the arms of Lord Jesus. Love~Irene Romo Soleymani

Flowers were purchased for the family of Mary Villarrial. Send Flowers

From Mark and Josette Daigle

From Mark and Josette Daigle purchased flowers for the family of Mary Villarrial. Send Flowers 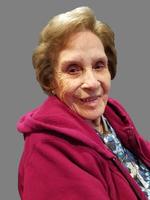