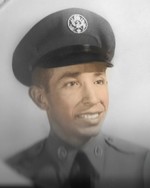 Johnny Ochoa, Sr. 83, of Waco, Texas passed away Thursday, October 17, 2019 surrounded by his family. Funeral services will be 11 a.m. Tuesday, October 22, 2019 at OakCrest Funeral Home, with Rev. Albert Ruiz, officiating. Burial with full Military Honors will follow at Oakwood Cemetery. Visitation will be 6 to 8 p.m. Monday October 21, 2019 at the funeral home.

Johnny was born on October 20, 1935 in Downsville, Texas to Willie and Consuelo (Gonzalez) Ochoa, Sr. He attended public schools and graduated with an Associate’s Degree. Johnny retired from the U. S. Air Force, after servicing 20 years, 4 months and 17 days. After retirement he made his home in Waco, Texas. He was a good and caring man, and a good friend to all he met.