To share your memory on the wall of Harry J. Tichavsky, sign in using one of the following options:

Provide comfort for the family by sending flowers or planting a tree in memory of Harry J. Tichavsky

Provide comfort for the family by sending flowers or planting a tree in memory of Harry J. Tichavsky

Harry James Tichavsky, 69 of China Spring, passed away early on August 23, 2020 at Baylor Scott & White Hillcrest Hospital after a tragic tractor accident on August 8, 2020. A Rosary will be held on August 26, 2020 at 6 pm at St. Philip Catholic Church, with visitation following. A Mass of Christian Burial will be held at St. Louis Catholic Church on August 27, 2020 at 2 pm with Fr. Ryan Higdon as Celebrant. Burial will follow in St. Mary’s Cemetery in West, TX. Social distancing and masks will be required.

The Rosary and mass will be streamed live on the OakCrest Funeral Home Facebook site.

Harry was born September 25, 1950 in Hill County to the late Frank and Mary Macha Tichavsky. He grew up in the Abbott area, graduating from Abbott High School. He received his bachelor’s in political science from University of North Texas and his masters in banking from Louisiana State University.
He married his high school sweetheart in 1973, Nancy Sinkule.

Harry had a love for banking, gardening, working on the farm and spending time with family, especially his grandchildren. He was a servant leader with a tremendous giving heart. He was an honorary member of the Knights of Columbus serving St. Louis Catholic Church for over 40 years as an usher at the 8 a.m. Mass and treasurer many years, has served on the St. Louis Pastoral Council and volunteered with Baylor Bear Foundation, Greater Waco Chamber of Commerce and most recently treasurer of the Heart of Texas Sertoma Club.

Harry took pride in fixing almost everything. He rarely said “no” to anyone’s help or need. He had an unwavering love for the Heavenly Father and ensured his family had that same devotion. Harry could calm almost any situation with his methodical approach.

You may sign the online Guest Book, share a message to the family, and view the online Tribute Video at www.oakcrestwaco.com
Read Less

To send flowers to the family or plant a tree in memory of Harry J. Tichavsky, please visit our Heartfelt Sympathies Store.

Receive notifications about information and event scheduling for Harry J.

We encourage you to share your most beloved memories of Harry J. here, so that the family and other loved ones can always see it. You can upload cherished photographs, or share your favorite stories, and can even comment on those shared by others.

Mendy Petross & Mark Petross family, Bob and Judy Castro, Sheri, Tonya, and Robin, and other have sent flowers to the family of Harry J. Tichavsky.
Show you care by sending flowers

Posted Aug 27, 2020 at 01:02pm
Rose Ann and I were very sad to learn of Harry's passing. We knew him at church and through our banking. He was a very professional banker and loan officer. We always enjoyed our visits with him. He was a very dignified man, and we admired his love of the Church and God. He was a great example for everyone who knew him and he will be greatly missed. We hope he will look down upon us from heaven and pray for all of us that we may see him and our Savior some day. God bless his family.--John and Rose Ann McAnally
Comment Share
Share via:
MF

Posted Aug 26, 2020 at 10:06pm
Dear Aunt Nancy, Clint, Olivia, Amber, Jim, & family, please accept my love and sympathy during this incredibly sad and difficult time. I remember Uncle Harry with much respect and admiration, a man of honor dedicated to both family and the greater community, whose strength, intelligence, and kindness will not be forgotten. With love from April Petross.
Comment Share
Share via:
MD

Posted Aug 26, 2020 at 09:40pm
The community will greatly miss this good man and the seeds he planted will live indefinitely. 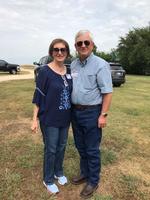 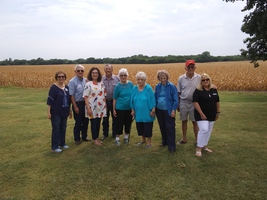 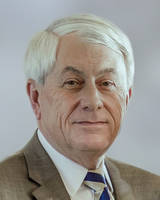