To share your memory on the wall of Harold Gibson, sign in using one of the following options:

Harold was born October 17, 1922 in Lost Creek Community in Coleman County. As a small child he moved to Falls County to the Busby Community. Harold attended Union, Busby, and Lott schools.

Later in life he worked for Texas New Mexico Utilities in Marlin. In 1944, he began working at General Tire, eventually retiring in 1984.

Harold served for many years as an active deacon at Park Lake Drive Baptist Church and was also a member of the Geo. W. Denton Masonic Lodge #24, from where he received his 50 yr. pin.

Harold was preceded in death by his parents; his first wife, Virginia; and his sister, Lois Guest.

The family wishes to express their heartfelt thanks to the staff of Ridgecrest for the care given to Harold over the years.
Read Less

To send flowers to the family or plant a tree in memory of Harold Vernon Gibson, please visit our Heartfelt Sympathies Store.

Receive notifications about information and event scheduling for Harold

We encourage you to share your most beloved memories of Harold here, so that the family and other loved ones can always see it. You can upload cherished photographs, or share your favorite stories, and can even comment on those shared by others.

Kay and Bruce Hochstetler and Don and Pat Ray sent flowers to the family of Harold Vernon Gibson.
Show you care by sending flowers

Posted Jun 09, 2020 at 08:44pm
I am so sorry about y’all loss! The family will be in my thoughts and prayers! He was a great man! -Santana Robinson
Comment Share
Share via:
GR

Posted Jun 09, 2020 at 08:26am
As a young man growing up uncle Vernon greatly influenced who I would become as a man. He always could pop the biggest smile on you and when he greeted you it was like you were the only one in the room. I deeply regret just now finding out about his passing, yet, as I write this I have a simple smile on my face and I think he would want it to be that way. Every time I was around him I became a better person and I learned how to greet people with love. He could weave a story about anything that had me on the edge of my seat. Thank you uncle Vernon for giving me a piece of you forever. Tell my aunt Jenny "hello" for me and give my mom and dad a hug for me! I love you.
Comment Share
Share via:
CM

Posted Jun 07, 2020 at 09:01pm
Ron & Clova,
I am very sorry to hear about Mr. Gibson. He will be missed. When my Daddy ( Buddy Roberts ) was in Ridgecrest for two years, I visited Mr. Gibson several times and we had some nice and interesting conversations. He was always very friendly, pleasant and had a good sense of humor. He showed me a few of his old coins and told me about repairing antique clocks years ago. My thoughts and prayers will be with both of you during this difficult time. With Deepest Sympathy, Ray Roberts
Comment Share
Share via:
BP

Posted Jun 07, 2020 at 07:08pm
We send our love and prayers to your family. Vernon was one of the kindest and uplifting people I have ever known. We have many found memories. Brian and Harriet Parker
Comment Share
Share via: 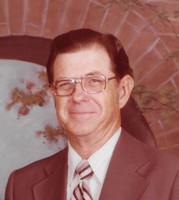