To share your memory on the wall of Geraldine Davidson, sign in using one of the following options:

Print
Our beautiful mother passed away peacefully November 11, 2019 with family at her side at Providence Hospital in Waco.

Geraldine Margaret Cervenka was born on March 23, 1931 on the family farm at Route 2, West, Texas. She was the younges... Read More
Our beautiful mother passed away peacefully November 11, 2019 with family at her side at Providence Hospital in Waco.

Geraldine Margaret Cervenka was born on March 23, 1931 on the family farm at Route 2, West, Texas. She was the youngest of seven children born to Will J. and Annie (Smajstrla) Cervenka. The birth certificate listed Mom’s name as Carolyna instead of Geraldine. Carolyna was her father’s mother in Czechoslovakia. Mom’s birth certificate was corrected, but even today it has a paper attached showing Carolyna. Mom always said she wished they would have kept her name as Carolyna. She preferred to go by Geri.

Starting as a young girl, Geri had to pick cotton among other farm chores. She and her siblings wished they lived in the city (Waco). Years later after living in the city, she wished she was back on the farm.

Geri attended Leggett Elementary School. She and her siblings had to walk almost 2 miles to school. She graduated in the top of her class at West High School in 1949.

Geri attended Four-C Business College in Waco. She graduated early, finishing an 18-month curriculum in less than a year. She could take shorthand and type over 100 words per minute. Geri worked as an executive secretary at various companies, including Crawford & Co. Claims Adjusters and The Rohan Company. In her late seventies, Geri worked as a product demonstrator at Sam’s Club, from which she retired.

Geri was an avid Baylor Bears and Dallas Cowboys fan. We believe she waited to watch one last Baylor game. What a finale --- Baylor defeated TCU in triple overtime! Last year Mom was selected to be an Alumni by Choice of Baylor University. She proudly displayed her “degree” in her room, and pointed it out to all visitors.

Not only was she beautiful and intelligent, but Mom was a wonderful cook and seamstress. Her family loved her homemade pickles, banana pudding, apple crisp, beautiful Christmas cookies, and sweet tea. She had a green thumb and anything she planted blossomed. Geri always had beautiful rose bushes and a lovely yard.
Geri was proud of her Czech heritage and loved dancing to polka music. She would often honor her heritage by dressing in an authentic Czech kroje and baked homemade kolaches for her family.

Geri always put God and family first. She was a member of St. Louis Catholic Church for many years and raised her children in the Catholic faith.

Presentation of Gifts was by granddaughters Heather Michum, Lacey Chollett, and Libby Davidson.
A heartfelt Eulogy was delivered by grandchildren Ashley Stone and Lucas Chollett.

To send flowers to the family or plant a tree in memory of Geraldine Cervenka Davidson, please visit our Heartfelt Sympathies Store.

We encourage you to share your most beloved memories of Geraldine here, so that the family and other loved ones can always see it. You can upload cherished photographs, or share your favorite stories, and can even comment on those shared by others.

Your Family at CAPSHER sent flowers to the family of Geraldine Cervenka Davidson.
Show you care by sending flowers

Posted Nov 13, 2019 at 10:45am
Sending our sincerest condolences for your loss. We are praying that God gives you His overwhelming peace and hope today.

Your Family at CAPSHER purchased flowers for the family of Geraldine Davidson. Send Flowers 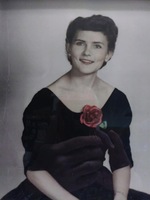 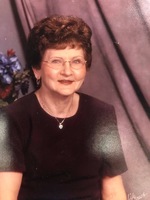