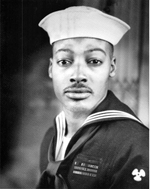 George Vance was born to Adam Vance and Maggie Phife-Vance in Little Rock, AR on August
4th, 1926. He was the oldest of 3 children which included James and Lucille Vance, his brother
and sister. He attended Stephen Elementary and Dunbar High School in Little Rock, AR. He
lived in the Depression Era in a small Southern town. He learned the lessons of the time which
honed a strength and wisdom that served him well all the days of his life. He often spoke of his
mother’s courage and tenacity. He remembered when he was 4 years old, his mother decided she
was not going to be stuck in the cotton fields of Arkansas. She saved 20 hard earned dollars so
she and her son, George, could move to the city. He often said his mother did not go to the field
that day, she walked through the field, with Lil George, and caught a ride to town that started
their new life. Life was not easy by any means and he remembered many days there was little or
no food and his mother would not eat until he ate. All the days of his life he would leave a little
bit of food on his plate so that his mother would have food to eat.

George attended Stephen Elementary and Dunbar High in Little Rock. At the age of 12 he left
home to find work and get on his own. He related that many days, though is mother was against
Lil George getting out on his own, but when he would come home from work, he would find his
mother had come to his room, changed the sheets on his bed, left clean clothes, and food for him
to eat. Many days there were long walks from town to home and sometimes he would walk all
night long only to have to turn around and go back to town. He was tenacious and determined.

George entered the military August 4th, 1943 in Little Rock. Part of his time served in the
military included participation in an experimental program that was used to prove Black men
could be trained to be Navy seamen. Up to this time the only service Black men were recruited
to participate in was as stewards and cooks. He attended basic training at the
Naval Station Great Lakes (NSGL) which is the Navy's largest training installation and the home
of the Navy's only Boot Camp.

Interesting background into these times for George include the Navy selected the Great Lakes to
be the site of the first African American trainees. In September 1942, segregated "Negro Service
Schools" were opened. The policy of segregation led to small service school classes with only
four or five students in a class. By 1944 Great Lakes began to integrate training and all training
was integrated by mid-1945.

George served in the Pacific region including time on the USN Leonard F. Mason where he was
on the shakedown cruise which earned him the title of Plank Owner. He traversed around the
world covering the circumference twice and earned service medals and coveted tattoos to
commemorate these achievements, though he balked at the tradition of the piercing of the ear to
document that achievement. In later years he associated with the USS Leonard F Mason DD 852
reunion committee where former shipmates who served on the ship down through the years
would meet at a different location every year. He enjoyed the distinction of being a member of
the first crew and while serving attained the rank of Machinist mate, First C lass.

Upon his honorable discharge from the military, George began his long and illustrious
employment history working at Bethlehem Steel, Los Angeles City Schools, Department of
Water and Power that he retired from. He desired to provide his family with the best that money
could buy, and he was determined that his wife would be home with his children, therefore he
worked several jobs at the same time and the doctors attributed his heart problems to long years
of hard work with little or no rest.

George lived a full life of service including commitment to his Lord and Savior Jesus Christ at
an early age and at the time of his homegoing he was a proud and active member of Carver Park
Baptist Church, Waco Texas. He fiercely believed in the power of God and his faith was strong.
He studied his bible, enjoyed discussion the bible with learned theologians and friends as well.
He was a praying man and believed God sits high, looks low and knows all about it. He enjoyed
traveling and was a voracious reader. All the days of his life, he looked to gain deeper
understandings whether it was researching his health conditions or what tires he should buy for
his car.

As we look to the hills where our help comes from, we, his family, and friends, have all been
touched by knowing George Vance. We count ourselves fortunate to have had him in our lives.
The stories we share about this very colorful man will give us comfort, as we continue to share
his legacy of excellence to the generations to come and continue to be encouraged to look up and
strive for higher ground. Rest well mighty man of God…see you later and love you more.