To share your memory on the wall of Estelle Wooten, sign in using one of the following options:

Provide comfort for the family of Estelle Wooten with a meaningful gesture of sympathy.

Estelle was born September 16, 1921 to William Frank and Freida Lemke Cox in the community of Baileyville, TX in Milam County. She was the seventh of ten children. She grew up and attended school in the New Salem, Briary, Powers Chapel, and Pleasant Grove communities.

She was united in marriage to Nat S. Wooten on August 19, 1939. They lived in Cedar Springs, TX for a brief time before moving to Dallas, TX, where their daughter Sue was born in May of 1941. After a brief stay in Dallas, Nat and Estelle returned to the farm where Nat raised his home-grown tomatoes. They moved to Waco in 1948 where Nat was employed with the General Tire and Rubber Company for 31 years. Their son, Robert Terral (Terry), was born in February of 1951. Upon Nat’s passing in May of 2005, she remained in her home in Waco for two years before moving to China Spring to live with Sue in 2007.

Estelle was no stranger to, nor afraid of hard work. In her early years, working in the cotton and tomato fields and performing many chores related to farm life were commonplace. Before her children left home, she was an avid home maker. She was a self-taught, and very talented seamstress and designer, and was also very proficient in refurbishing furniture. Both of her children were outfitted in handmade clothes that were finer than any that could be bought. She kept her home in immaculate condition, and any event she ever hosted was exquisite.

Estelle also had a passion for cooking, and the food she prepared was fit for a King. She made the best pecan pie this side of Heaven.

After her children were grown, Estelle was employed at Gilbreath’s Manufacturing where she designed lingerie. She also served as the clothing Director for the Methodist Children’s Home for 12 years.

Upon retirement, she enjoyed gardening and was well known for growing beautiful roses. She spent many happy hours with her family and friends. She made numerous outfits for her grandchildren and great-grandchildren whom she dearly loved. All of us affectionately called her MiMi. She served as a caretaker for three of her sisters, making many frequent, and sometimes long trips to bring food and clothing to them. She had a particular fondness for gospel music and possessed a very large collection. She sang in church and was constantly attending gospel music singings with Nat. It is quite doubtful that she ever missed an episode of Lawrence Welk, and she adored the Gaither vocal band.

As MiMi’s health began to decline, Sue served as a selfless caretaker for her for nine years, sacrificing her own needs to take care of her mother. Even as her health failed, she still enjoyed crafts and sewing. She kept her mind sharp by playing Spider Solitaire, and she spent an hour a day in devotional books and the Scriptures, not to mention countless hours of prayer for others. Baylor Women’s and Men’s basketball games brought her great pleasure (being a basketball player herself in her youth).

Mimi was always a faithful church member, and the last church she attended was First Baptist Church of China Spring where she was faithful until her health forced her to stay home. After having to stay home, she still had church with Sue, as there were many pastors she enjoyed watching on television.

The most important aspect of Estelle’s life was her relationship with Jesus Christ. She knew that church membership was not a substitute for salvation. She fully trusted Jesus Christ and His finished work on the cross for her salvation. She was a bold witness for Christ, and is responsible for leading several souls to the Lord. When she offered advice to her friends or family, it was not her opinion, but rather, “What saith the Lord”. She was generous and giving to everyone she encountered, frequently putting the needs of others before her own. She was not one who waited for the needy to ask for assistance. She saw the need and responded.

In lieu of flowers, donations may be made to First Baptist Church of China Spring, The Salvation Army, charity of your choice, or simply extend your kindness to those in need.
Read Less

We encourage you to share your most beloved memories of Estelle here, so that the family and other loved ones can always see it. You can upload cherished photographs, or share your favorite stories, and can even comment on those shared by others.

Posted Jan 10, 2020 at 02:13pm
Sue,
It was so good to see you at grocery store several weeks ago. I'm sorry to learn of your mother's home going; rejoice with all of you that she is now safe and well at home in Heaven. Beautifully written obituary; told of her life - classy, lovely lady inside out.
Our sympathy to you and all of the family.
Joyce & Don Alanis
Western Heights
Comment Share
Share via:
HS

Flowers were purchased for the family of Estelle Wooten. Send Flowers

Posted Jan 10, 2020 at 08:30am
Dear Family,
Ms. Wooten was such a dear sweet soul who will be truly missed. We are so sad to hear of her passing, but know she is home with her Lord and Savior. I remember how she was always impeccably dressed in beautiful outfits, that I'm sure she made because one cannot find clothes as well made as she wore. She was a wonderful seamstress and was sewing well into her 90s. She was a beautiful person inside and out.
With Sympathy,
Kevin, Heather and Dane McKethan
Comment Share
Share via:
KH

Posted Jan 09, 2020 at 06:03pm
Dear Sue and Family,
Rick and I are sorry for the passing of your lovely Mother, Grandmother, Great Grandmother, and Friend.
I always enjoyed talking with her and admired how Sue took care of her and adored her so much. She had a rich and full life that will be greatly missed here.
With Sympathy,
Karen & Rick Harper
Comment Share
Share via:
KA 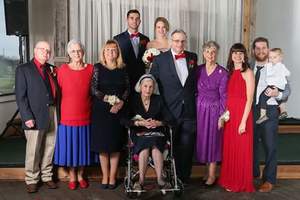 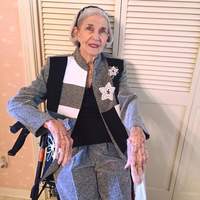 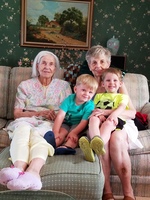