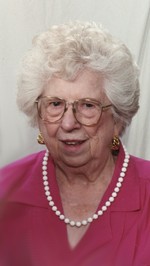 Elizabeth (Betty) Barefield, 95, passed away peacefully Thursday, October 17, 2019. Graveside services will be held Tuesday, October 22 at 10 am at Oakwood Cemetery, with Rev. Wayne Blackshear officiating.
You may pay respects on Monday, October 21 from 9 am to 4 pm at OakCrest Funeral Home.

Elizabeth was born February 4, 1924 to Lowell Lee (Jack) and Mabel Sikes Wilson in Waco, where she lived most of her life, except for a brief time in which she resided in Hawaii. She married Jack Barefield on August 7, 1971.

She worked as a Claims Investigator at Central Freight Lines, retiring after 30 years of service.

Betty was a loving mother and grandmother and in her later years she grew especially fond of chocolate, which always made her feel better!

She was preceded in death by her parents; husbands, Ernest Roy Martin and Jack Barefield; and son, Steven Roy Martin.