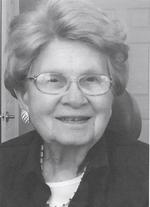 Donnie Audrey Kite Cooper, 6 days shy of 102, passed peacefully in her sleep into the arms of Jesus early Saturday, October 19, 2019. She will be buried alongside her husband in Oakwood Cemetery in a family ceremony on November 2. A celebration of her life will be held in the Chapel of First Baptist Church Waco on November 2 at 11 a.m. with Pastors Matt Snowden and Randall Perry officiating.

Donnie was born on October 25, 1917 in Harmon County near Hollis, OK to Cora Edes and Alvin A. Kite. The oldest of eight children, she graduated from Westview Consolidated High School in 1935. Donnie was very active in the local 4-H Club where competition and teamwork developed the Head, Heart, Hands, & Health. She said it would be hard to overstate the significant role this organization played in her life. It was there that she competed in vocal music, dramatic reading, art, & sewing and even attended the State 4H Roundup in Stillwater, and the national convention in Chicago.

When she was 13, an itinerate pastor came to speak at her church, and in an emotional response to the invitation, she accepted Jesus Christ as her Lord. She was baptized later in the First Baptist Church of Hollis. This decision shaped her life and her family forever.

Donnie graduated Phi Beta Kappa from Oklahoma A&M (now OK. St. Univ.) in May 1941 with a B.S. degree in Home Economics. As a student, she was active in the Baptist Student Union and it was there that she met and fell in love with Victor K. Cooper, from Hobart, OK. They were married on October 4, 1942, two weeks after Victor was drafted into the U.S. Army. He was later deployed to France & Germany during WW II. Upon his return from the war in 1945, Victor earned a Masters Degree in Religious Education from Southwestern Baptist Theological Seminary in Ft. Worth. Over the next 30 years, Donnie & Victor lived in Springfield, MO, Miami, OK, Waco, Austin, and Dallas where he served as Minister of Education in various churches. Donnie was his faithful and dedicated partner. A talented artist, she enjoyed presenting “chalk talks” where she would tell a Bible story and illustrate it with colorful chalk drawings. During these years her 4 children were born; Marilyn, Randy, Kenny and Sarah.

Upon retirement, they returned to Waco where they worked in the library at First Baptist Church documenting the church’s historic relationship with Baylor University and the city of Waco. Donnie’s beautiful handwriting was on display in the notes she wrote to contributors. In 1999, Donnie and Victor were honored by First Baptist as Senior Adult Couple of the Year.

Family, art, and creativity were Donnie’s passions. She shared her talents with her church family and passed on her artistic flair to her children while always providing healthy meals for them. She blossomed as a member of the Central Texas Watercolor Society, and her family is grateful for the legacy of her paintings. They serve as reminders that she loved the beauty she observed in nature.

We are all thankful to have shared life with Donnie. She had a lively sense of humor and always greeted friends and family with a smile and an encouraging word. She was the definition of grace, class, and kindness, and she lived her faith in word and deed.

Her family is grateful to Providence Place, the staff and residents of St. Elizabeth’s Assisted Living and St. Catherine nursing center for their care.

Memorials may be made to First Baptist Church Waco Foundation, 500 Webster, Waco, Texas 76706.