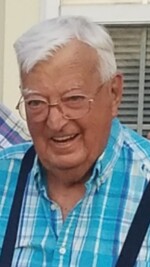 Donald Ray Nunn, Sr, 77 of Gholson, passed away Friday, December 11, 2020. Graveside services will be held Tuesday, December 15 at 1 pm at Gholson Cemetery. You may pay your respects from 10am to 3pm on Monday, December 14 at OakCrest Funeral Home.

He grew up in Waco and attended Waco schools. After high school Don served his country in the US Army and TX National Guard where he was recognized as a M-1 Rifle Marksman. He later enlisted in the US Navy, receiving the Navy Commendation Medal. Don had many hobbies, but fishing was at the top of the list. He looked forward to his Sunday’s attending Hubbard Cowboy Church and above all things he loved the Lord, his wife of 51 years and spending time with his family.

He was preceded in death by his parents; brothers, Charles J and Roscoe Nunn; and his son, Donald Ray Nunn, Jr.

Don leaves behind his loving wife, Corrine “Connie” Nunn; son, Sean Nunn and wife, Sherry; and 2 daughters, Djuna and Kimberly. He will be greatly missed by his grandsons, Kyle Nunn (wife Lindsey), and Clayton Nunn and great grandson, Wyatt Nunn along with three bonus grandchildren and 5 bonus great grandchildren. He also leaves behind brother, Travis Nunn and wife, Gayle; and two sisters-in-law, Sherry and Cyndie.

The family would like to thank everyone for their thoughts and prayers over the last several weeks and the healthcare staffs caring for him. In lieu of flowers, the family has requested donations be made to the Hubbard Cowboy Church, Attn: Building Fund, PO Box 278, Hubbard, TX 76648.