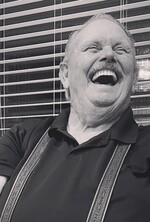 Alton Ray Davidson left this earth for his eternal home on January 7, 2021. He was born in Houston, TX on November 4, 1940 to Dorman Clinton Davidson, Sr and Gracie Oates Davidson. He was raised in Manvel, TX. He married the love of his life, Nelda Sue, on March 27, 1959. Together they raised 3 sons while living in the Waco area, in the community of Speegleville.

During their marriage he was a member of Speegleville Baptist Church, serving as a Church Deacon and singing in the choir. He was an active Mason with Crawford Masonic Lodge #585. He took great pride in his duties as a Mason. It was at the Davidson’s homesite in Speegleville that he, along with his late wife, helped begin what is now known as the Central Texas Horseshoe Pitcher’s Association. He served as the club President for many years. He was also a longtime member of Speegleville Saddle Club.

Gator always had a joke to tell, a hug to give and an “I love you”, to say. These traits, along with his big smile and laughter, and deep bass voice that he loved to share in song, will always be special memories of a man that had the love of so many.

He was preceded in death by his parents, wife, and sister, Sarah Davidson.

Gator had a great love for the Lord and would want everyone to rejoice for him, now being face to face with Jesus and reunited with special loved one’s. We will all cherish our memories and time with him. He would tell us all “you can’t say “I love you” too much, and “it’s always good to make people laugh”!

The family will be planning a Celebration of Life for him in the coming months. There will be an obituary placed in the newspaper prior to that date.

Also, the family would like to thank the ICU nurses at Providence for their care and compassion. Please say extra prayers for these special heroes as they are dealing with so much during this time.