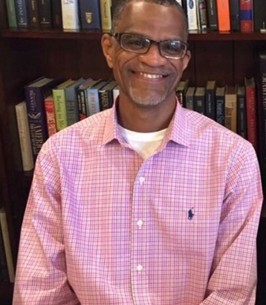 Print
Carl Jerome Batts, 54, of Waco entered into eternal rest on Thursday, November 28, 2018 after a long battle with cancer. Funeral services will be held Wednesday, December 5 at 10 am at OakCrest Funeral Home. Burial will follow at 1 pm at Central Texas State Veterans Cemetery in Killeen. Visitation will be held Tuesday, December 4 from 6 to 8 pm at the funeral home.

Carl was born September 16, 1964 in Petersburg, VA to William and Eva Batts. He was the third of four children. Soon after graduating high school he joined the military and served an extraordinary career in the United States Air Force with the flight line. Planes were his passion.

He married Phyllis A. Bullard and shared a lifetime of love for 34 years. To that union three children were born.

Carl was a private person, soft spoken and low key. He did not want a lot of attention focused on his career life, he rather you know that his greatest accomplishments were being a loving husband, great father and an excellent papa, which he mastered all. He was also a great pianist in which he gave all the credit for his talent to his beautiful mother Eva Batts. He loved his family and we loved him back.

He was preceded in death by his father, William A. Batts, Jr.

A special thank you is extended to Dr. Hitesh Singh and the over all staff at Baylor Scott & White McClinton Cancer Center (Waco, TX), Baylor Medical Center (Waco, TX), NP. Annie Chang and the oncology unit nursing staff. Everyone was awesome, we had great care, felt love and compassion from all.

We would also like to thank the medical teams at MD Anderson Cancer Center (Houston, TX); Doctors, Donna Weber, Gregory Kaufman, Ginsu James, Stanley Nairan, Eric Pitts, Ken Ward and all staff that participated on the front lines and behind the scenes in Carl’s care. You all did an excellent job. The care Carl received from everyone was as he stated “impeccable”. It was just his time to rest. Thank you again.

To send flowers to the family of Carl J. Batts, please visit our Heartfelt Sympathies Store.

We encourage you to share any memorable photos or stories about Carl. All tributes placed on and purchased through this memorial website will remain on in perpetuity for future generations.

GR
I was sorry to hear about Carl's passing away. I sat next to him for a year or two at the VA call center and never knew he was ill or what he did in the Air Force. He was, indeed, a private person, but I knew he was a good guy. Rest in peace, Carl.
George W Reamy - Thursday December 13, 2018 via Condolence Message
Share This:

LF
The Impact of One's Life
When a stone is dropped into a lake, it quickly disappears from sight but it's impact leaves behind a series of ripples that broaden and reach across the water. In the same way, the impact of one's life lived for Christ leaves behind an influence for good that touches the lives of many others. To the Batts Family, the testimony for Christ that Carl has left behind will continue to be a blessing to many. Praying God's comfort and encouragement will give you peace.
LaTonya Graves & Family - Wednesday December 05, 2018 via Condolence Message
Share This:

DJ
My sincerest heartfelt condolences to the entire Batts family on the loss of Carl. Remember; "Weeping may endure for a night however joy cometh in the morning." Ms. Eva, Randy, Ms. Jackie, William and Batts family, can you just imagine the welcome Carl received from his beloved Pop? (Smile) Envision his slender"healed" fingers forever tinkling a piano of pure gold as he accompanies the Heavenly Choir! To God Be The Glory! In the Lord's words "Well done my good and faithful servant!"
Darlene Jones - Tuesday December 04, 2018 via Condolence Message
Share This:

BS
To the Batts family,
Mr. Batts will be so dearly missed. His kindness, his generosity was such a blessing to his family & friends. We are thankful to have had him grace our lives. The time he took to care for his family will never be forgotten. May he rest now. You are in our thoughts & prayers.

D
My condolences to the Batts family during this difficult time. In the Bible, Jehovah God gives us hope. Acts 24:15 says, “there is going to be a resurrection of both the righteous and the unrighteous.” Revelation 21:4 says, “and he will wipe out every tear from their eyes and death will be no more.” Our thoughts and prayers are with you.
Daniela Lawrence - Saturday December 01, 2018 via Condolence Message
Share This:
1
Page 1 of 1
Share
×

Thank you for sharing!

Provide comfort for the family by sending flowers.

Or use your email:

Provide comfort for the family by sending flowers.

Connect with families at their time of loss. By subscribing to email updates, you will receive two daily updates containing all new stories, photos, candle lightings, condolences, and more.