In Memory of
Joe T
Sanchez
2017
Click above to light a memorial candle. 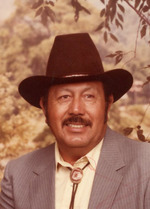 Joe T. Sanchez (El Kido) fell asleep in death on Saturday, August 19, 2017, at his home after a long-term illness. His family was by his side. Funeral services will be 11:00 am Thursday, August 24, 2017 at OakCrest Funeral Home, with burial to follow at Oakwood Cemetery. Visitation will be 6 to 8 pm Wednesday, August 23, 2017 at the funeral home.

He was born on April 8, 1936 in Elm Mott, Texas to Jose and Maria T. Sanchez.
Joe married his wife, Helen Barrientez on January 31, 1959. Together they moved to Waco and raised a family. Joe worked for various trucking and road construction companies. He retired from Waco Paving as a heavy equipment operator.

Everyone that knew Joe knew that he was a musician at heart. He composed music and lyrics to many songs that were recorded with the group Maxie Bustamante y Los Alegres. Although Joe never quit playing the guitar, singing, and writing songs, he gave up the life of a musician and dedicated his life to Jehovah God, symbolizing it by water baptism. From that point on, he dedicated as much time as he could to teaching ones he met about God’s Word, the Bible, and the importance of living one’s life according to God’s principles. Joe loved life, telling jokes, music, and his family and friends. He was a humble man who knew no stranger.

Joe was preceded in death by his parents, his son-Jessie, grandson-Jessie Jr, his brothers-Tanis, Raul and Lupe, sisters-Elvira and Esther all of Fort Worth, Texas and his brother-Jessie of Vacaville, California.

The family would like to express gratitude to Dr. Scott Blattman and his entire staff as well as Dr. Donald S. Cross for the years of exceptional care that was provided.

We would also like to convey our heartfelt appreciation to Nikki, Laurie, Jake and all the outstanding staff of Bluebonnet Health Services for the compassionate care that was shown to our family and loved one.

To send flowers to the family or plant a tree in memory of Joe T Sanchez, please visit our Heartfelt Sympathies Store.